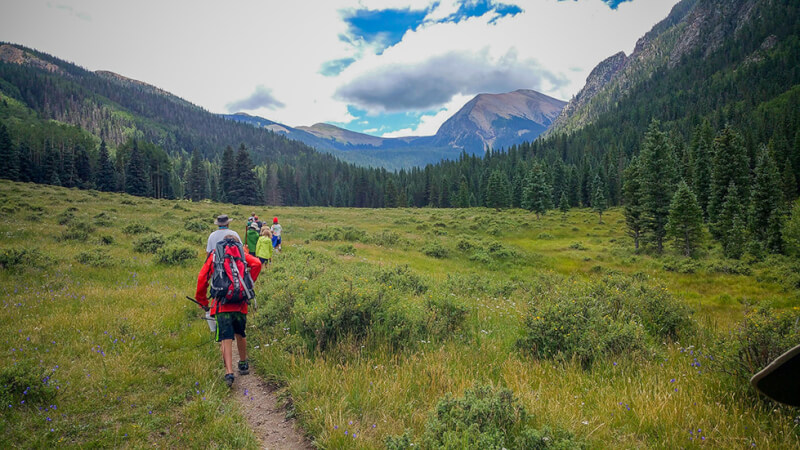 This backpacking trip traverses the Sangre de Cristo back county from Santa Fe to Pecos, enjoying several beautiful alpine lakes along the way. This five day camp will provide campers an opportunity to challenge themselves, and enjoy the beauty and fun of being in the wilderness.

Campers will learn how to prepare and pack for a backpacking trip, the 6 W’s, map reading and Leave No Trace Principles. Campers will practice leadership skills by taking on different jobs during our trip, including L.O.D. (Leader of the Day), cook team, and water team.  We will play games, enjoy campfires and hike everyday.

This trip is a huge accomplishment, confidence booster, and the stuff of lifelong memories. Campers will need backpacking gear and tent. Please inquire if you need loaners. Camp meets for a gear check and hike on Monday, and campers head out Tuesday-Friday four our four day adventure. 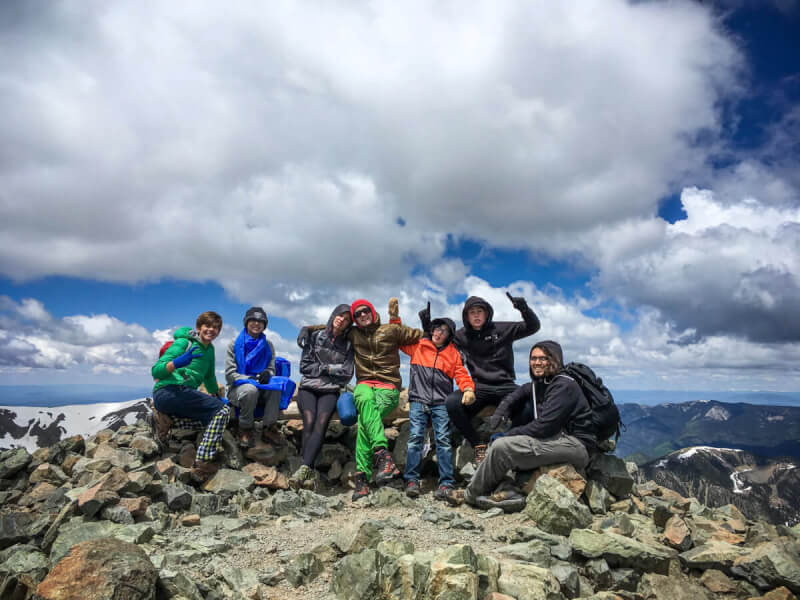 We had an impressive group of campers for our three-day backpacking trip. After a successful prep day on Monday, we headed up to the Wheeler Peak Wilderness. Our spectacular winter meant that there was still a substantial amount of snow on the ground, and our campers did a stellar job traversing the trail and, most importantly, being helpful and encouraging to each other even when the going got tough.

During our first evening, our campers proved that they were ready to learn the basic skills of backcountry travel: how to set up tents, how to cook safely, how to navigate, how to sleep warm, etc.

Each camper took on a different job every day (such as being in charge of cooking a meal, or being a Leader of the Day – in charge of pacing and group dynamics) and they rose to those jobs with aplomb. We all went to bed tired, happy, and excited for the following day.

Due to the snow levels, it was an even more exciting hike than usual: lots off off-trail rerouting, careful snow-stepping, and glissading down low-angle sections. Again, we were very impressed with the campers spirit and ability to help each other. They were wonderfully cheerful and resilient in the face of this challenging climb.

Overall, it was a great trip. In true backpacking style, we returned dirty, tired, and happy, having had an experience that we will never forget. 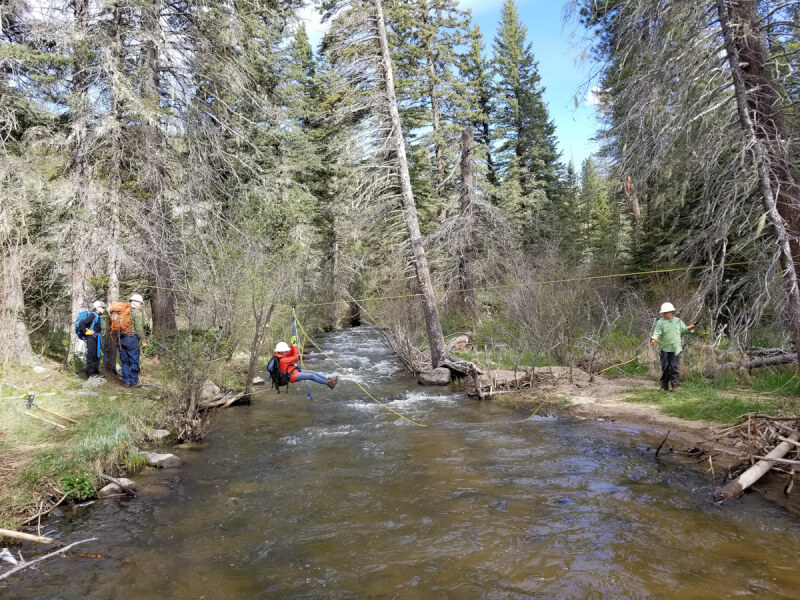 Our first ever Backcountry Service trip was a great success! The best part, according to most, was the incredible food.  Thanks to the Backcountry Horsemen and Kevin Balciar, we ate like kings and queens. My son’s comment was: “We eat better here than we do at home, Mom!”  (Sadly, there is some truth to that, especially this time of year!;)

Other highlights included learning to build a Tyrolian Traverse to cross the raging Pecos River for our commute to work each day. Afterward, we discovered there was a log bridge which was quite handy, but it was nice to have learned this skill and fun to zip across the river to work in the morning.

We spent our first day out there getting settled, enjoying the beauty around us, building the traverse and playing games such as Eagle Eye and Ninja.  The boys worked together to build a fire, which was difficult at first, but they got better as the days progressed. They became skilled at building with damp wood, and finding dry wood when most of the wood was damp.

On Days 2 and 3 we got to work on the trails. Pete Prince from the Santa Fe Fat Tire Society, led us in the trail work, which involved finding and rolling large boulders into place to create high spots on the trail to prevent erosion.  We built water bars and trimmed trees and shrubs to accommodate the wide and tall load of equestrian traffic. It was hard work, but we were blessed with some nice cool days and clouds, ample food and water, and a spirited hard-working group.

We hiked to Cave Creek after work on the third day. It was a beautiful walk with so many wildflowers in bloom and the Pecos River raging. On the way back the rain started to fall and we were blessed with a wonderful thunderstorm shortly after we arrived back to our tents. A perfect moment to relax in our tents and enjoy the fruits of our labor.

Our evenings were spent around the fire where we made up stories during a story circle, played games, ate s’mores, and shared appreciations.

We are so grateful to Pete, Kevin and the Backcountry Horsemen for making this trip possible and so delicious.  Thank you to the kids who came and worked hard to improve our trails. They have learned some new skills, and no doubt, a newfound appreciation for our trails.

We climbed Wheeled Peak on our three-backpacking trip to find out what we were made of. It turns out we are made of tears and laughter, dancing and determination, strength and acts of kindness.

It was a long, tough climb to 13,170 feet (5 miles one way) to the highest point in New Mexico. When the going got tough for one camper in our party, we called a group meeting to talk about how we could support one another to get there. One friend stepped forward to carry their shared backpack. We gave another permission to play his music so he could dance us up the mountain, which was cheering for all. The friendship and camaraderie of a third helped both of them to feel supported and able to carry on.

I stayed in the back with the slower campers. We took lots of breaks, enjoyed the scenery, the rainbow of wildflowers, and saw a whole family of big horned sheep. The going was hard but steady. After multiple (disappointing) ‘false summits’, we finally made it to Wheeler Peak, the top of New Mexico!

This kind of experience can’t be measured in feet and miles however, but sweat, tears, and gumption.

The memories made, the friendships gained, and the confidence that comes with overcoming hardship to achieve the seemingly impossible is what will stick with these kids as they move back into their daily lives.

I am so proud of all the Mountain (climbing) Kids! for working hard and supporting each other to reach this incredible goal.  – Katie

What an impressive week! Our courageous campers hiked, ran, skipped, and occasionally danced their way to the top of Wheeler Peak, the highest point in New Mexico, after a serious amount of preparation. Their physical capabilities and positive mental attitudes were truly impressive. We rounded the week off with some kayaking at Santa Cruz Lake. Nothing beats gliding around on cool, calm water after spending the week aiming to summit the next grand peak! – Max 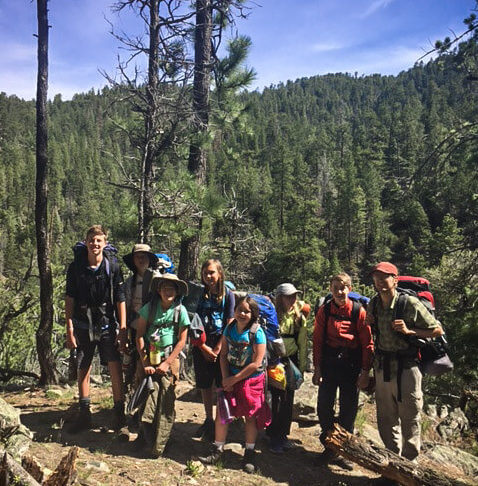 This week was one of impressive maturity from our campers. A particular before/after moment encapsulated this for me: a quarter of a mile up the Rio en Medio parking area, the trail crosses the river for the first time. On our first day, I was walking in the back with Sofia, our only ten year old, who had never seen a tent before this trip. I told her we needed to cross the river, and she stopped dead. “I can’t!” she exclaimed.

She found out she could, and this trepidation was in stark contrast to our return trip. On Friday, I was walking behind Sofia, who was leading us out to the vehicles. She was one of our Leaders of the Day on Friday (which I will explain momentarily), and had just taken us down the last two miles of trail, setting a steady pace and stopping at appropriate times to make sure everyone was hydrated. We approached the first river crossing, and I delightedly watched her scamper across: without hesitation, declaration of inability, or even really noticing that it could be considered a challenge.

Some stats about this trip: There were two leaders, and six campers (although our roles were occasionally reversed!). Most campers had been backpacking before, although none had done a trip this long. We went 14 miles in three days, climbing and and descending 2000 feet. Each day we had two campers each on tent crew and cook crew: those responsible for housing and feeding the rest of us. We also had two LODs. These were our Leader of the Day: responsible for our maps, telling us when we were leaving, setting the pace, checking in with the rest of us to see if anyone was in need, deciding where we would camp, and myriad other things. It takes a while to get into systems of duties and responsibilities such as this, but our campers did so admirably. After Lucio turned his ankle, it was awesome to see Oliver, as LOD, continually check in with him and make sure that he could keep up with the rest of the group. Or to listen to Max, who was brave enough to be a LOD on our first day, encourage everyone up our steepest sections of trail.

When Ezra and I awoke on Friday, Lucio was warming his hands over a crackling fire, which he had woken up early to prepare for the group. As I was eating breakfast, I told Owen and Felix to pack their bags and take down the tents: they half-exasperatedly told me that they had already done both of those things, and returned to their oatmeal.

The trip was not only laden with responsibility: there were games, songs, and the occasional backcountry-themed rap. However, what stuck out to me about this week was the way in which our group rose to the occasion of taking the trip into their own hands. From helping us choose our route to practicing stove safety, it was a week of proto-adulthood: in two or three years, I hope they are taking themselves on similar trips. 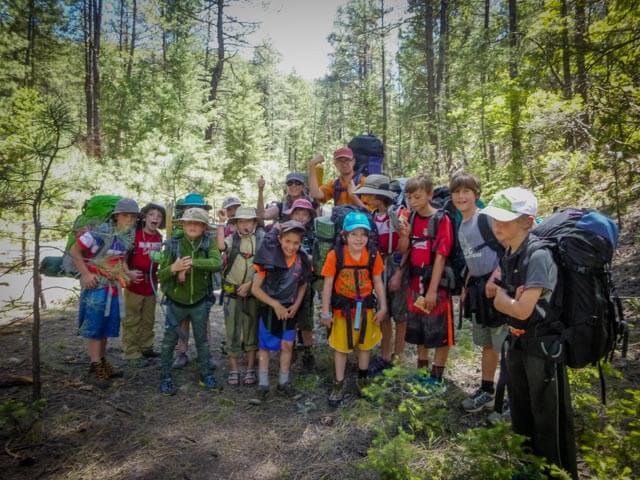 Backpacking the Sangres! May 26-29

This was Mountain Kids first ever backpacking trip and an amazing start to the summer! On Day One we checked and learned how to pack our gear – going light is the key!  We made survival bracelets and survival kits so we would be ready for anything on our adventure.  The very next day, a small group of (mountain) kids and adults backpacked along the Rio en Medio Trail for a fun-filled overnight in the forest. We worked together to get there, wading through the watery trail and navigating new stretches of trail due to the high water.  We were happy to arrive and then worked to set up our camp.  We played capture the flag and roasted hotdogs and marshmallows over the fire. We learned how to purify our own water and how good food tastes on a backpacking trip! A small group went on an adventurous night hike with Jim, while the rest of us sung camp songs by the fire before tucking in and sleeping like logs for the night. The next day we hiked to waterfalls #2- #4 on the Rio en Medio for a change of scenery.

We were all exhausted, dirty and happy by the end. Everyone left with new friends and newfound confidence in their strength and abilities! Thanks to a great group of kids for an amazing, adventurous and fun first week of Mountain Kids 2015!  Many thanks also to our wonderful staff: Magnificent Max, Fearless (French Fry) Fran, Crunchy Katie, and Jumping Jim for keeping everyone safe and happy!